You are here: Home / Articles / MARITIME COOPERATION AS A THRUST AREA BETWEEN INDIA AND INDONESIA 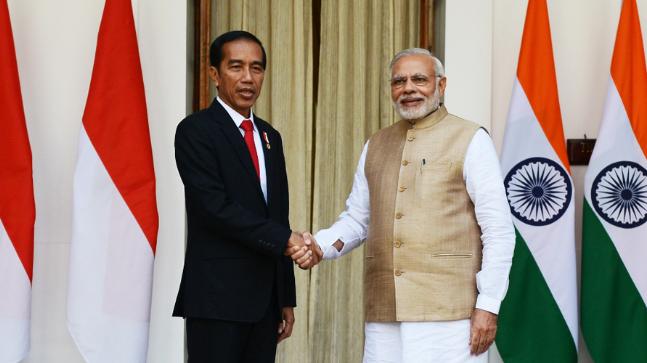 Maritime Cooperation as a Thrust Area between Indian and Indonesia

The upcoming visit of Indian Prime Minister, Mr Narendra Modi, to Indonesia (later this month),is reflective of the strong desire of both the countries to work more closely together, in the face of the ‘rapidly evolving strategic realities’ in the Indo-Pacific region, after years of mutual neglect. During this visit, the Prime Minister is expected to focus on concluding agreements and boosting cooperation in the fields of defence, security, space, science-and-technology, connectivity, and the promotion of inter-faith dialogues. There is a good chance that the Defence Cooperation Agreement, which was signed in 2001, would be renewed. However, the primary focus and goal of this visit would be the strengthening of the maritime cooperation between these two important Indo-Pacific players. India and Indonesia are expected to expand their maritime connectivity, including direct shipping links, cruise-ship tourism, and, coastal shipping between the Andaman &Nicobar Islands and Aceh. This was highlighted during the recent visit to New Delhi by the Indonesian Coordinating Minister for Maritime Affairs, Luhut Pandjaitan, when he proposed granting India access to the island of Sabang, located at the northern tip of Sumatra and close to the Strait of Malacca.

This Prime Ministerial visit presents an opportunity for India to showcase its full support for Indonesia’s vision of being the Global Maritime Fulcrum (GMF).  This vision of President Joko Widodo (Jokowi), seeks to go beyond economic development internal to Indonesia and the mere enhancing of connectivity between the islands of the Indonesian archipelago.  At a wider plane, it seeks to “bring the Indian Ocean back into Indonesia’s regional canvas and project Indonesia as a power straddling thousands of islands between two continents (Asia and Australia) and two Oceans (the Indian and Pacific)”. The Indonesian Ocean policy released in 2017 to implement the vision of the GMF also mentions the need to take into account various other regional initiatives, such as China’s Belt and Road Initiative (BRI), India’s Act East policy, and the USA’s Rebalance Policy. Indonesia’s Ocean Policy articulates the Presidential vision of synergising the GMF and regional initiatives that are consistent with Indonesia’s national interests, so as to make a positive contribution to peace.  The question of how India might best react to the GMF is a seminal one.  The seven pillars[1] of the GMF can resonate well with New Delhi’s own articulations of India’s maritime vision and, consequently, these pillars of the GMF could and should be used by India to cooperate and show its ‘active support’ for Indonesian maritime endeavour. Prime Minister Modi’s impressive and visionary formulations, such as SAGAR, SAGARMALA, Project MAUSAM, revival of the Spice Route and the Cotton Route, etc., can be readily linked to the Indonesian pillars concerning the revival of maritime culture, the development of maritime infrastructure, and the connectivity sought by the GMF.  The Indonesian government is also opening its doors to foreign investment in the field of shipbuilding. This, too, provides rich pickings for India, and can easily be utilised to further meaningful cooperation with its maritime neighbour.  ‘Connectivity’ is yet another significant area of cooperation between India and the ASEAN that holds out very substantial promise.  As part of its own ‘Act East’ policy, India is seeking opportunities to be a meaningful partner in the Masterplan for ASEAN Connectivity (MPAC).  Investing and cooperating with the ‘Sea Toll Highway’ project of Indonesia will help India to share ‘best practices’ on the one hand, and, on the other, to attain greater connectivity with the ASEAN region as a whole. The linking of the SAGARMALA project, Project MAUSAM, the Spice Route, SAGAR (Security and Growth for all in the Region) with the GMF would make India’s own position in the Indian Ocean Region far stronger than it presently is, and, in addition, would provide a much-needed balance against China’s BRI.  Apart from this, India could also cooperate in the GMF’s pillars of maritime diplomacy and the strengthening the Indonesian defence forces, especially the Navy.  The forthcoming Prime Ministerial visit should be leveraged to catalyse discussions on information-sharing in the maritime domain, so as to counter both non-traditional and traditional security-threats, and, to increase navy-to-navy cooperation.

Indonesia’s earlier ‘inward-looking’ defence orientation and thinking are now undergoing a change, wherein it is keeping a close eye on developments in the Indian Ocean as well as in the Western Pacific, specifically the South China Sea. This may be seen in Indonesia’s altered stand against China’s assertions whereby Jakarta is actively voicing its concern over China’s growing encroachment in and around Indonesia’s Natuna islands.  Importantly for India, Indonesia is one of the few countries in Southeast Asia that has wholeheartedly embraced the concept of the Indo-Pacific. To balance China’s rise, Indonesia is likely to turn to India, especially given the strong historical and cultural ties that bind the two nations together.  Of course, it is also true that Indonesia did participate in the Chinese flagship BRI Summit and proposed projects worth $28 billion. Thus far, China has, through the BRI, made investments in the Jakarta-Bandung High Speed Railway project, and has signed contracts for investing in two hydropower projects, one power plant and a steel smelter (these contracts were signed during the recent visit of Chinese Premier Le Keqiang to Jakarta).  However, Indonesia seems reluctant to accept Chinese proposals for the development of strategic ports under the ‘Sea Toll Highway’ plan of President Jokowi. Offering India the access and opportunity to invest in the development of the port of Sabang shows Indonesia’s ‘trust’ in India. India can and should use this‘trust card’ to its advantage and should actively plan to invest in the development of other Indonesian ports as well, such as Malahayati in Aceh,a major source of Indonesian exports to India, Teluk Bayur, Padang in Western Sumatra; Belawan, Dumai, Perawang and Kuala Tanjung in North Sumatra, and, ports in southern Java. These are islands that border the Indian Ocean and are located astride four of the chokepoints of the Indian Ocean.

Greater engagement with a country such as Indonesia, which is acknowledged as having played a ‘leadership role’ within the ASEAN for the past several years, and which actively seeks a greater presence of ASEAN in the Indo-Pacific, will greatly help India improve its own position and standing in ASEAN. This will, in turn, help in the promotion and further strengthening of India’s Act East policy. Beijing has long been using the tools of ‘diplomacy and investment’ in South Asia to great advantage.  It is now time for India to diplomatically and economically engage much more intensively with countries like Indonesia, through New Delhi’s Act East policy.  Indonesia and India both enjoy strategic locations that make them players that ‘one cannot ignore’ in the Indo-Pacific region.

*Premesha Saha is an Associate Fellow at the National Maritime Foundation (NMF), New Delhi. The views expressed here are her own, and do not reflect the official policy or position of the NMF. She can be reached at premesha@gmail.com