You are here: Home / Commodore Surendra and Savita Kale Research-Grant 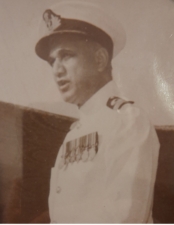 The “Commodore Surendra and Savita Kale Research-Grant” (CSSK-RG) was established on the sixth of June 2022, thanks to the large-hearted generosity of the redoubtable Mrs Savita Kale, wife of the late Commodore Surendra Datt Kale, a deeply-committed and distinguished officer of the Indian Navy. The CSSK-RG commemorates the lifelong symbiotic relationship between the Kale family and the Indian Navy. It additionally seeks to honour the memory of their son, the late Ranjit Kale, who was named after the first INS Ranjit and passed from this world to join his fellow angels at the tender age of just eight years.

Born in Nainital on 26th June 1916, the late Commodore Kale was a distinguished  alumnus of the Administrative Staff College of India and the Defence Institute of  ok Study, as also the prestigious National Defence College, New Delhi. He was a member of the Institute of Marine Technologists, Bombay, and the British  Institute of Management, UK, and a Fellow of the Institute of Work Study  Practitioners, UK.

In his illustrious career as a naval officer, he had the distinction of multiple seagoing command appointments, ranging from minesweepers to destroyers such as the Ranjit, the Godavari, and the 22nd Destroyer Squadron, and  culminating in the coveted command of the all-gun cruiser, the Mysore, which was the pride and joy of the Indian Navy of that period.

He also held several important appointments ashore, including Commander of  aval Dockyard (Bombay), Chief of Staff Officer to the Flag Officer Bombay, Director of Weapons and Equipment at the Naval Headquarters, Deputy Director General of the National Cadet Corps, and Director of Naval Training at Naval Headquarters. Consequent upon his superannuation, he took to sea once again, this time as a member of the merchant marine, where he was the Master of the Merchant Vessels Sushma and the Kotamenang.  In his later career, he was the Marine Advisor to the Oil and Natural Gas Corporation (ONGC).

Commodore Kale is survived by his spouse, Mrs Savita Kale, their son, Rajesh, and their two daughters, Ritu and Renee. In accordance with the wishes of Mrs Savita Kale, the CSSK RG will be utilised to fund policy-relevant research on subjects of maritime relevance to India.