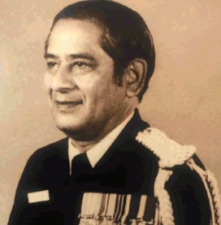 The “Vice Admiral KK Nayyar Fellowship” was established at the National Maritime Foundation (NMF), in May of 2020, by the family of the late Vice Admiral KK Nayyar, PVSM, AVSM, lN (26 December 1929-18 September 2018).  The Fellowship promotes and supports intellectual and policy-relevant research on subjects of maritime consequence to India and, in so doing, commemorates the life and achievements of this great Colossus of Indian maritime thinking. The National Maritime Foundation was the late admiral’s brainchild, and he imbued it with a single-minded focus — that of being a bright and enduring beacon that would dispel the maritime blindness with which India had been severely afflicted for much of its recent history. As the founder-chairman, he helmed the NMF in its formative years and established it as a leading voice that would guide India’s maritime endeavours.  Admiral Nayyar’s family, conscious of the especially close bonds between the late admiral and the NMF, have, through their personal generosity, sought to advance the process of nurturing policy-relevant maritime scholarship that the late admiral so vigorously espoused.

Vice Admiral Kewal Krishan Nayyar, Param Vishisht Seva Medal, Ati Vishisht Seva Medal, was commissioned into the Indian Navy on the first day of January in the year 1951.  Right from his earliest days in the navy, he established a reputation for conceptual brilliance, coupled with a well-adjusted “Seaman’s Eye” for detailed planning, and a consistent demonstration of outstanding tactical-, operational- and strategic acumen in the execution of his plans.  Successive stints in the Directorate of Naval Plans at Naval Headquarters (as it was then known) honed his analytical dexterity and financial skills to a fine edge.  However, he was certainly no armchair admiral, as his distinguished sea-going tenures clearly demonstrate.  Besides commanding several frontline surface combatants, including the Rana and the Delhi, the two cruisers that were, at that point in time, very much the Indian Navy’s pride and joy, he had the rare distinction of commanding both, the Eastern and the Western Fleets of the Indian Navy.  Vice Admiral Nayyar retired in 1986, after having helmed the Southern Naval Command as its Flag Officer Commanding-in-Chief, and, having tenanted the high post of the Vice Chief of the Naval Staff.

His retirement from active duty did not in any way diminish his passion to bring about a restoration of that degree of Indian primacy that drew so many powers — pre-colonial kingdoms and European nation-states alike — to India’s shores like so many moths to a brilliant, dancing maritime flame.  He was recognised, respected and greatly valued for his outstanding intellect and his vast and varied experience.  As such, he enjoyed the confidence of the highest decision-making levels of the Government of India.  Appointed to be a member of the National Security Advisory Board, and the Committee on Defence Expenditure, he also chaired the panel set up by the 11th Finance Commission to assess defence expenditure for the period 2000-2005.  His extensive experience and intellectual effervescence shaped his panoramic worldview and fanned in him a fierce desire to create robust and quintessentially Indian organisational structures that would foster a resurgence of maritime thinking in the country.  The NMF stands as the realisation of that desire.  An avid reader, writer and historian, he authored a number of books, including the notable, “Amar Jawan — A Book of Remembrance”, which was published in 1997, in the 50th year of India’s Independence, and which lists the names of every single Indian solider, sailor and airman who, since 1947, has laid down his life in the defence of India.  This book offers an eloquent testimony of the passion to serve, devotion to duty, and the high ideals, all of which Admiral Nayyar epitomised.  Another prominent book of his was “National Security – Military Aspects”, which was published in 2003 but such is its erudition and quality that it retains contemporary relevance.

His focus upon such strategies and plans as could be seamlessly transformed into practical execution was unwavering.  Having been a principal architect in the creation of the NMF, he pushed it to meaningfully contribute to strategic planning and the flawless execution of carefully-formulated strategic, operational and tactical action within the maritime domain.

Vice Admiral KK Nayyar believed that in-depth research was the soul of advocacy.  For its part, the NMF has diligently trodden upon this path. The research areas of interest for the NMF are wide and varied.  They include Security Studies — involving both, thematic research and research into the maritime geostrategies of the various powers operating in the Indo-Pacific; studies that explore the various facets of Maritime Technology ; Environmental studies relevant to the transition to a Blue Economy, the maritime impacts of climate-change, and the sustainable harnessing of oceanic resources — both living and non-living; and, research into the several disciplines that collectively constitute ‘Maritime Affairs’, incorporating, inter alia, international maritime public law, maritime history, heritage and culture, maritime-safety, maritime trade and connectivity, and, maritime facets of energy.

Each research-project under the “Vice Admiral KK Nayyar Fellowship” is pursued in close cooperation and consultation with the Policy Foundation, New Delhi, and aims to yield meaningful and policy-relevant recommendations to the government, as also to other stakeholders.

The inaugural research-project being undertaken by the KK Nayyar Fellows at the NMF will address the resilience of Indian interests and infrastructure in and off India’s coastal stretches in general and in its major coastal cities in particular, in the face of the adverse maritime impacts of climate change