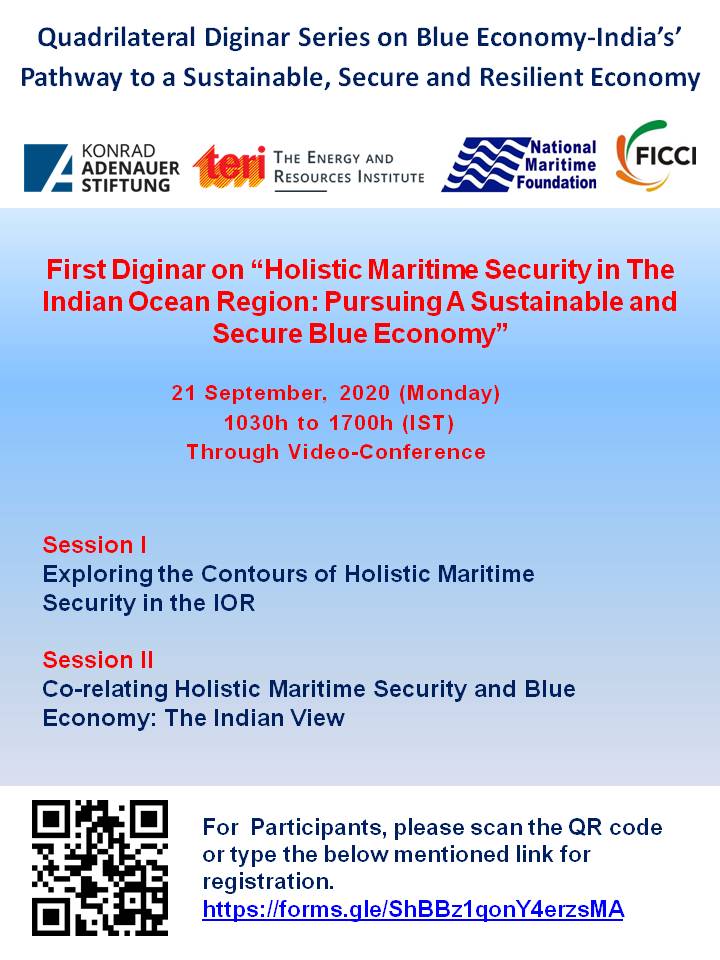 The past decade or so has witnessed a distinct evolution in the way “Blue Economy” has been perceived and its linkages with “Holistic Maritime Security” are more evident and complex. For India there is an intrinsic link between the oceans and her economy, hence the whole economy of India is a “Blue Economy”. This would also be the case for all maritime nations. Even landlocked nations whose imports and exports are carried on the oceans can also stake a claim as “Blue Economy” nations. It was with this concept in mind that the India office of Konrad-Adenauer-Stiftung (KAS), The Energy and Resource Institute (TERI), The National Maritime Foundation (NMF) and the Federation of Indian Chamber of Commerce and Industry (FICCI), decided to organise a conference on examining Blue Economy as India’s pathway to a Sustainable, Secure and Resilient Economy.

However, due to the ongoing COVID situation, the planned conference has been put on hold.  In order to progress the debate, in the interim period, it was decided to continue the interaction online in a series of six Diginars, two each by NMF, TERI and FICCI, from September 2020 to February 2021. This series of Diginars would be followed by a national conference, subject to the COVID situation.  The first Diginar organised by NMF will be held on Monday, 21 September 2020, which will explore the various issues relevant to “Holistic Maritime Security’ and linkages with “Blue Economy.”