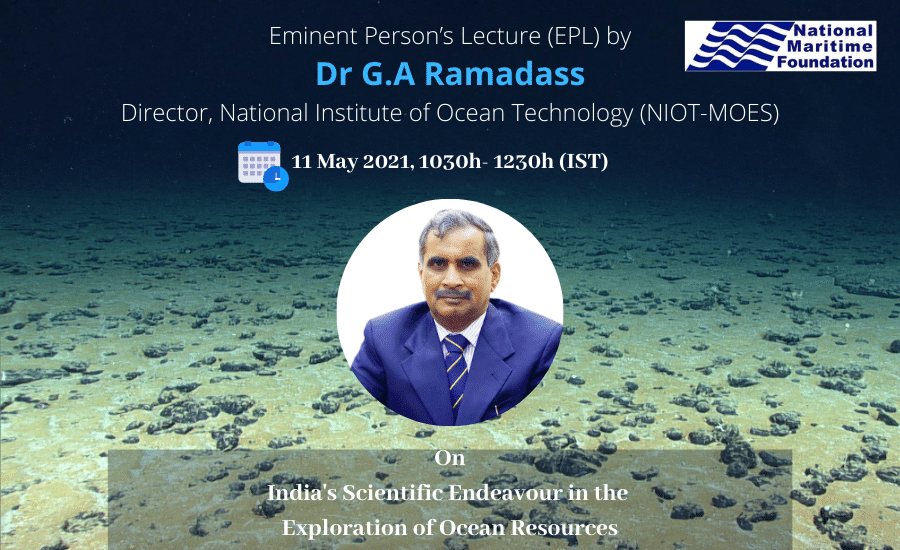 About 70% of the earth is covered by the oceans.  It means, 70% of the earth’s resources are still unexplored for human use. Energy, fresh water, minerals and biomass are some of the non-living and living resources that can be harvested from the oceans. The development of reliable technologies for the sustainable exploration and harvesting of these resources is the need of the hour.  India, with a long coastline and a vast Exclusive Economic Zone (EEZ) is realising the importance of these resources and has accordingly launched the ‘Deep Ocean Mission’ to develop the technologies needed to harvest these resources in an environmentally-friendly way. The efforts of the National Institute of Ocean Technology (NIOT), an autonomous institute of the Ministry Earth Sciences (MoES), Government of India, in this endeavour will be presented in this talk.

About Dr. G. A. Ramadass

Dr G. A. Ramadass  is the Director of the National Institute of Technology(NIOT), Chennai, an autonomous body under the Ministry of Earth Sciences, Government of India. His research areas include Deep Sea Technology, Deep sea Mining,  Underwater Acoustics and Marine Instruments. Presently he is coordinating a project for the development Indian Manned Scientific Submersible ‘MATSYA 6000’ which is intended for carrying three scientists/engineers to 6000 metre depth in the ocean.

Since the inception of NIOT he has been leading different technology development projects. In 2010 he won the National Geoscience award under the Exploration of Oil and Natural Gas category and NRDC award for the year 2017. He led NIOT team during the 34th Indian Scientific Expedition to Antarctica in February- March 2015. Polar Remotely Operated Vehicle (PROVe), developed indigenously at NIOT, was used for exploration in the lake and shelf area of Antarctica during this expedition.

A doctorate from Indian Institute of Technology, Madras and M.Sc from IIT, Kharagpur, he handled technology development programmes leading to products and patents.  He has been the Chief Scientist of several cruises and scientific explorations on-board various research vessels

It will be our privilege and honour to have you at the Webinar as a participant.
Kindly, Register Here to receive the link for the webinar.