You are here: Home / Articles / IS COVID-19 LIKELY TO CHANGE THE SECURITY ORDER OF THE WESTERN PACIFIC... 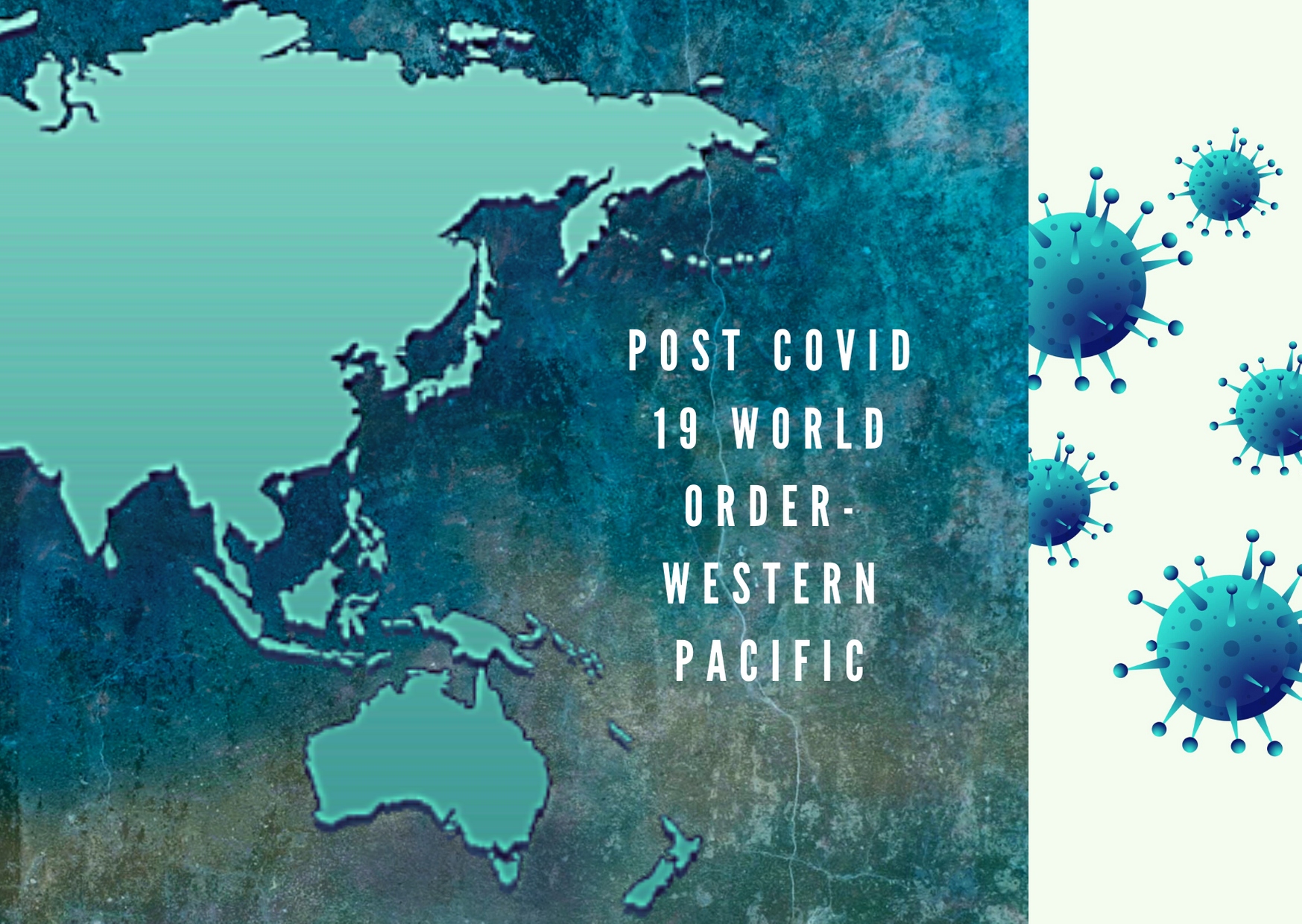 IS COVID-19 LIKELY TO CHANGE THE SECURITY ORDER OF THE WESTERN PACIFIC IRREVOCABLY?

On 12 March 2020, the World Health Organisation (WHO) declared COVID-19 to be a pandemic, by which time a large number of countries were engulfed by the viral outbreak.[1]  The pandemic achieved what many conferences on climate change, ocean conservation, or carbon sequestration, could not.  It exposed the frailty of humankind despite all its modernity in the face of the poetic justice of Mother Nature.  It has also resurrected the philosophical dialectic between John Locke, Thomas Hobbes, and Jean Rousseau, on the State of Nature.  However, the intensity of the Hobbesian power struggle even during the gravest hours of modern humanity, is baffling, to say the least.  Amidst all this, multilateral security collaboration in the Western Pacific, spearheaded by the ASEAN, has been, arguably, the most significant casualty.  China has significantly intensified its assertiveness in the South China Sea.  In response, the US has bolstered its pre-emptive posture in the region.  The charged atmosphere seems to dispel all misgivings about the applicability of the ‘Thucydides Trap’ that Graham Allison wrote about in his provocative book “Destined for War”.  Against this backdrop, many have argued that the security order, post-COVID-19, would change significantly.  This article assesses the spurt of recent developments in the South China Sea (SCS), during the ongoing pandemic.  It evaluates whether the prospective change would be reformative or transformative.  Finally, it examines what has spurred the recent Chinese assertiveness and whether COVID-19 is, indeed, the inflection point?

Recent Developments in the Western Pacific

While most countries were engaged in the battle against the COVID-19 outbreak, China unabashedly pursued its geopolitical agenda, effecting increasingly bold infringements into the EEZs of Indonesia, Brunei, and Malaysia (See Fig 1).[2] 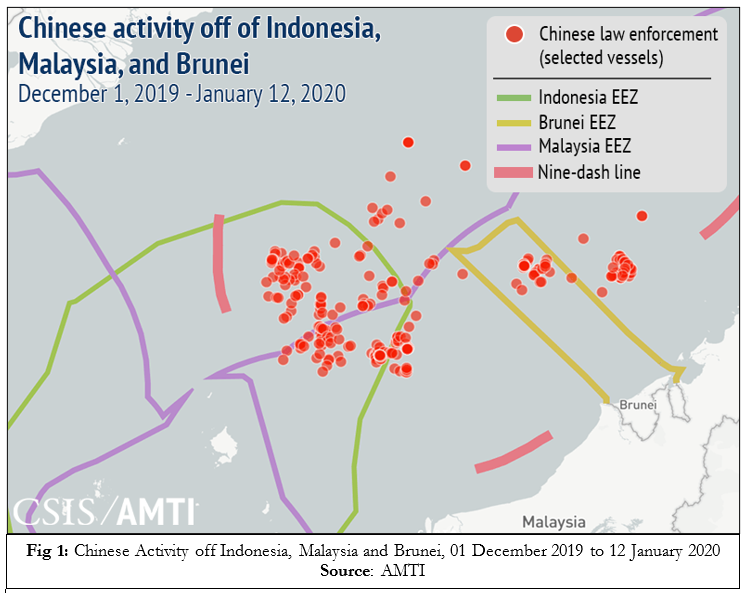 On 17 February 2020, a People’s Liberation Army Navy (PLAN) ship aimed its ‘gun-control director’ on a Philippine Navy (PN) anti-submarine corvette, the BRP Conrado Yap, off the Spratly islands.[3]  On 02 April 2020, a Chinese Coast Guard ship rammed and sank a Vietnamese fishing trawler, the QNg 90617 TS, off the Paracel islands.[4]  China has set up new research facilities on Fiery Cross and Subi reefs.[5]  On 18 April 2020, Beijing unilaterally announced two new administrative districts, under the local government’s authority of Sansha city in Hainan: one encompassing the Paracel Islands and Macclesfield Bank (Xisha District), and the other comprising Spratly (Nansha District) Islands. Thus, using its domestic institutions and legal frameworks, Beijing has bolstered its sovereignty claims in the SCS.[6]

After the USS Theodore Roosevelt was immobilised in Guam by an onboard outbreak of COVID-19 in which over 1000 sailors were afflicted by the virus, the US Seventh Fleet positioned the USS America Task Force in the SCS.  On 20 April 2020, the task force — equipped with F-35 jets and escort ships, which included, amongst others, an Australian warship: the HMAS Parramatta[7]— was deployed to prevent the Chinese Survey ship, the Haiyang Dizhi 8, from intimidating Malaysian exploration activities within the latter’s Exclusive Economic Zone (EEZ) off Sarawak.  On 27 April 2020, two Arleigh Burke Class destroyers traversed the Taiwan Strait.  A day earlier, a French frigate had transited through the Taiwan Strait.  April 2019 was especially significant because it marked the 40th year of the Taiwan Relations Act, which provides for US defence-support to Taiwan against coercion.[8]  A comparison with past years demonstrates the USA’s proactiveness in enforcing its Free and Open Indo-Pacific strategy.  The Obama administration had authorised two Freedom of Navigation Operations (FONOPS) in the SCS in 2015, and three in 2016.  President Donald Trump has intensified this, with six FONOPS in 2017, five in 2018, and seven in 2019.  During these FONOPS, the US warships engage in an ‘innocent passage’ within 12 nautical miles of the islands occupied by China in the SCS.  However, transits through the Taiwan Strait had dropped precipitously, from 12 in 2016 to five in 2017, three in 2018 and nine in 2019.  Until April this year, the US Navy had undertaken four FONOPS in the SCS.[9]  There has indeed been a definite surge in the US presence lately, resulting in a corresponding rise in Chinese aggressiveness.

Will the Security Order in the Western Pacific be Reformative or Transformative?

The global order tends to change gradually at first and then all at once.  A botched intervention by the United Kingdom in Egypt in 1956 marked the end of its reign as a global power.[10]  Could COVID-19 be the USA’s Suez moment?  There are multiple hypothesises on the nature of the prospective order.  Charles Kupchan envisions the future order to be pluralistic.[11]  Amitabh Acharya has called it by another name: multiplex order.[12]  However, a better understanding can be arrived-at only when the order is measured against some yardstick.  John Ikenberry’s precept for such a test is: power, legitimacy, and functionality.[13] The power, legitimacy and functionality of the US-led order has been challenged by a rising China, especially in the Western Pacific.  As a result, the status quo of the old order appears to be headed for a new normal. The question is whether this change would be reformative or transformative?

Robert Gilpin has averred that a reformative change is characterised by bargaining, coercive diplomacy, and even limited war.  On the other side, the Hegelian-Marxist perspective advocates violence and use of force,[14]  Randall L Schweller provides greater clarity on the nature of change.  He argues that while all revolutionary States are dissatisfied, not all dissatisfied States are revolutionary.  When a State is dissatisfied merely due to lack of prestige, then the demands of such a State can be satisfied within the prevalent order.  But when a State finds the order to be at variance with its core ideologies and values, the change would be revolutionary.  However, a revolutionary change could be incremental if the challenger is risk-averse, whereas, it would be violent if the challenger has the propensity for accepting risk.[15]  The recent developments in the SCS, during the COVID-19 outbreak, indicate that China is looking beyond incremental changes. Is COVID-19, then, the inflection point for the change?

What has spurred China’s Recent Assertiveness?

Many have argued that the post-COVID-19 security architecture will be significantly different, implicitly suggesting that the COVID-19 outbreak is the trigger for change.  Moderates like George Friedman claim that the old order has been unravelling since 2008.  The COVID-19 pandemic has only accelerated the process.[16]  Harsh Pant and Kartik Bommakanti believe that Chinese assertiveness in the SCS is meant to stir nationalism and divert attention from the international opprobrium that China faces.[17]  Collin Koh feels that Beijing is seeking to consolidate its gains before the promulgation of the Code of Conduct.[18]

2021 marks the centenary of CCP — an event of great significance but one that has all but drowned in the worldwide cacophony centred upon the COVID-19 pandemic.  During the 18th Party Congress of the Chinese Communist Party (CCP), Hu Jintao had etched the goals of making China a moderately prosperous society by 2020.[19] During the 19th Party Congress in 2017, Xi Jinping, too, had reiterated the deadline of 2020.  He had averred that the ‘China Dream’ could be realised only “under a stable international order”.[20]  Hence, from the perspective of the CCP, the years 2020 and 2021 are slog years, during which it is obligated to show some tangible results.  The CCP’s political legitimacy is closely tied to reaching its self-set benchmarks by 2021.[21]  In this light, the COVID-19 pandemic cannot be justified as the trigger for change. Rather it appears to be an unexpected distraction that has complicated the CCP’s efforts of realising the ‘China Dream’.

Lt Gen Gou-Lei, who is in charge of military operations and planning in China’s Ministry of National Defence, had recently declared that China intends to establish an Air Defence Identification Zone (ADIZ) in the South China Sea (SCS).  Such an ADIZ would further alter the security architecture in the SCS.  However, current Chinese diffidence in establishing an ADIZ is appreciated as being caused by Beijing’s realisation that it is, at the moment, unable to enforce it.  China would be keen to try to overcome this inability at the earliest.[22]  There also plans to conduct a large-scale landing-drill off Hainan Island to simulate the seizure of Pratas Island.  Administered by Taiwan, Pratas is closer to Macau than to Taiwan, and is an Achilles’ Heel for Taiwan’s military.[23]

To be sure, the world community would not be inclined to initiate a military conflict in the SCS.  But FONOPS and international mechanisms have proven to be ineffective in restoring a rules-based security order.  Hence, a new normal in the Western Pacific is only a matter of time.  The approaching ‘First Centenary’ of the CCP in 2021 seems to have accelerated the change. Amidst these developments, the untimely COVID-19 pandemic has proven to be an avoidable distraction for realising the ‘China Dream’.

To restore status-quo and deter further change, the US-led alliance has upped its ante in the Western Pacific. Enhanced pressure in the Pacific might temporarily force the CCP to look West or South for tangible achievements before the ‘First Centenary’. Under these circumstances, it would be prudent for China’s maritime and continental neighbours to maintain a higher degree of military preparedness and deter any irredentism.

*Commodore Somen Banerjee is a serving Indian Naval Officer, and a Senior Fellow at the National Maritime Foundation. He can be contacted at seniorfellow1.nmf@gmail.com. The views expressed are the authors and do not reflect the policies or position of the Indian Navy or Government of India. 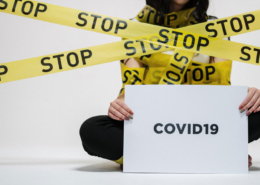 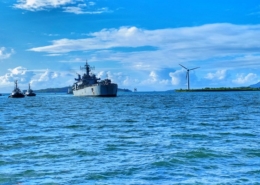 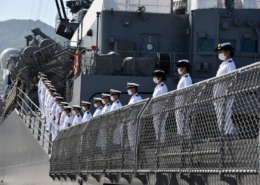 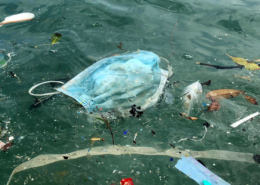 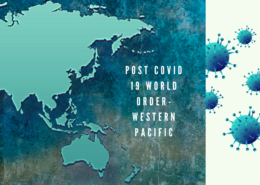 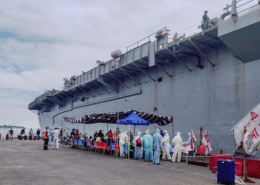 COVID 19 AND INDIA: THE CHALLENGE OF MARINE DEBRIS Scroll to top