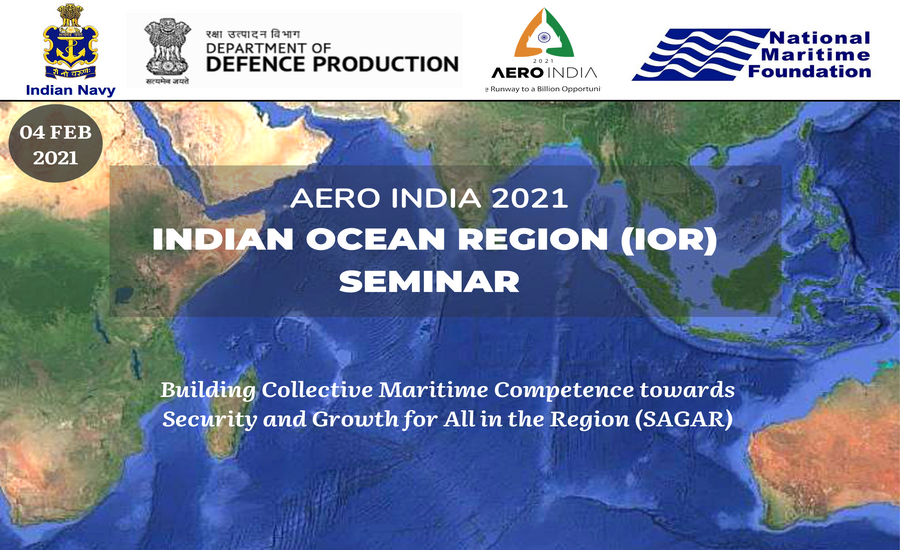 THEME: BUILDING COLLECTIVE MARITIME COMPETENCE TOWARDS SECURITY AND GROWTH FOR ALL IN THE REGION (SAGAR)

The Indian Ocean Region (IOR), which is the western segment of the Indo-Pacific Region, is an important part of the world as a whole, and, given its economic dynamism and potential, it is no exaggeration to state that it is, in fact, the ‘happening’ region of this century. The fast-evolving strategic complexities in the IOR have drawn global attention, and consequently, a number of extra-regional nations now evince a sustained interest in the region.  This has resulted in an increase in the number of intra- and extra-regional navies, with ships of as many as 40 nations present in the IOR at any given time. Therefore, while the opportunities for cooperation has increased, the margin for error has correspondingly decreased.

The Indian Ocean is the third largest body of water in the world and is crisscrossed by numerous vital International Shipping Lanes (ISLs) that feed a large swath of the world’s economies.  Around 80 per cent of the world’s seaborne oil trade passes through the choke points of this ocean, which quite literally connect the East to the West. The increase in demand for raw materials and the spread of global markets has also resulted in a corresponding increase in maritime trade, with a resultant increase in the number of merchant ships plying the waters of the IOR. Around 120,000 ships transit the waters of the IOR annually.  The security needs of these ships themselves, the cargo carried in them, and the ISLs they traverse, cover a wide swath, including both, traditional threats and non-traditional ones, the latter of ever-increasing frequency, variety and complexity.  As such, the Indian Ocean has gained prominence as an area of concern and interest for several nations.

The IOR can be said to consist of 51 nations spread across three continents. Of these 38 nations have an Indian Ocean coastline while 13 nations are landlocked. These landlocked nations also have the right of access to the seas, an aspect that has been clearly defined in the 1982 United Nations Convention on the Law of the Sea (UNCLOS). This right is effectively exercised by most of the landlocked nations, adding to the thriving maritime trade. The changed economic-security environment, underscored by the spurt in strategic engagements across the region, has resulted in a change in the security dynamics of the IOR. The diversity of issues facing this area results in the generation of a complex security matrix and it has been quite difficult to evolve a single comprehensive cooperative framework that addresses the entire littoral and maritime space. This notwithstanding, these changes are clearly altering the existing military balance, clearly pointing to the need for more intra-regional cooperation, with a specific focus on developing capacities and capabilities of IOR nations.

India, in line with the concept of SAGAR and in execution of its ‘Neighbourhood First’ policy, and desirous of setting the contours and pace of the ‘maritime security’ element of the Indo-Pacific Oceans Initiative (IPOI), can and must provide a much-needed fillip to a pan-regional development of capabilities, which is the country’s core strength area, while also developing capacities of IOR nations, commensurate with her core defence industry’s deliverables. This effort would go a long way in strengthening India’s position as a ‘First Responder’ and the region’s ‘Preferred Security Partner’ while promoting ‘stability’, enhancing ‘security’ and, preserving ‘peace’ in the IOR.

The complexity of security-challenges in the region notwithstanding, there are common issues that IOR nations face, and collective thinking would be the optimal way to generating solutions while simultaneously strengthening the security architecture of the IOR. This seminar, with NMF as the ‘Knowledge Partner’, would provide a platform for experts to air their views and for nations to share their security dilemmas. 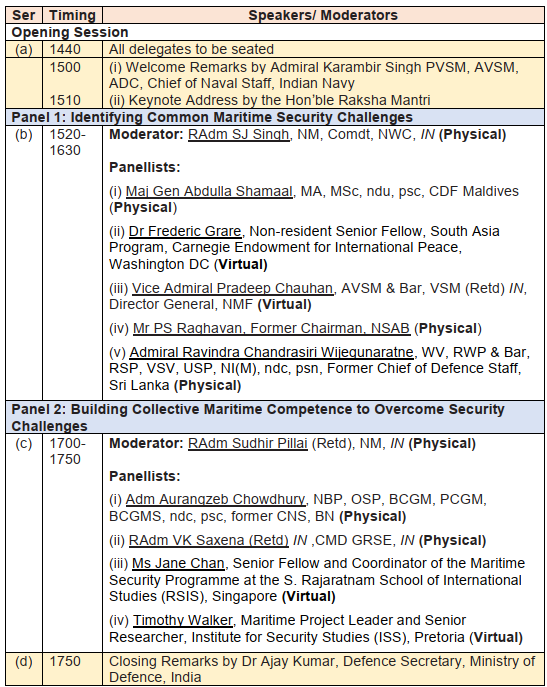