You are here: Home / Articles / DJIBOUTI: A ROADWAY TO CHINA’S “INDIAN OCEAN DREAM” 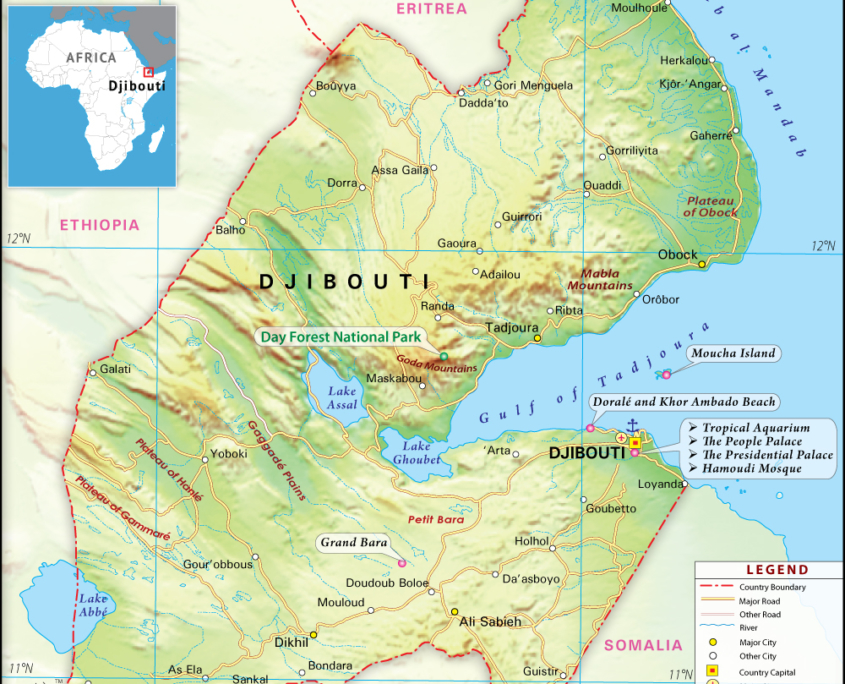 Commemorating the 90thanniversary of the People’s Liberation Army on 1stAugust 2017, China flagged its first overseas permanent naval military base in Djibouti. It dispatched troops to set up the base under the pretext that it is “conducive to China’s performance of international obligations”.

China first floated this overseas interest in November 2015, but it was put into operation in 2016 with infrastructure build up. China’s strategic foot-forward in the Indian Ocean Region (IOR) via the Horn of Africa has raised significant alarm over its military expansion in the region.However, dispelling concerns over a ‘China threat’, Beijing has downplayed the military-strategic significance of the base by claiming it to be a “support base meant for supply missions for implementing the China’s escorting, peace-keeping, and humanitarian aid missions in Africa and West Asia”. Justifying this objective, Chinese Foreign Ministry has stated that, since 2008, China has deployed vessels to the Gulf of Aden and the waters off the Somalia coast on escort missions, and that Djibouti has acted as a logistical support for replenishing food and fuel. Owing to this rational, Beijing has vehemently objected to calling Djibouti a military outpost that is built to serve as an entrepôt for its military presence, and has attempted to boost its deterrence role in the IOR.

This move by China reflects a shift in its foreign policy as it contradicts its own adherence to the ‘non-intervention’ principle. More specifically, it confirms Beijing’s pragmatic drift from Deng Xiaoping’s dictum of “keeping a low profile”. Undoubtedly, this first-of-its-kind Chinese base of in Africa is a direct output of the maritime component of China’s “Belt and Road Initiative” (BRI), famously called the “21st Century Maritime Silk Road” or “21 世纪海上丝绸之路” (MSR), which was put forward by Chinese President Xi Jinping in 2013. To note, the 2015 Vision Statement says: “The Road is designed to go from China’s coast to Europe through the South China Sea and the Indian Ocean in one route, and from China’s coast through the South China Sea to the South Pacific in the other”. There remains no doubt that the Indian Ocean is very important to Beijing’s national interest, and falls in its strategic gambit of great power politics. This exemplifies a shift in China’s focus from a continental to that of a maritime strategy—moving away from a focus on a longstanding focus on the Atlantic-Pacific Oceans to the Indian Ocean which has evolved into the world’s largest and most strategically significant maritime corridor for global economy and security.

In view of the changing perceptions of the IOR and with an overseas military presence at Djibouti, China’s mercantile rational of building economic activity along the international shipping lanes (ISL) seems to automatically get translated into expanding and strengthening its military presence in the strategic corridor of Indian Ocean along the MSR. This has aggravated speculation and concern over Beijing’s intentions. However, Beijing nullifies this by its logic of the “Three Nos”:non interference in the internal affairs of other nations; not to seek the so called ‘sphere of influence’; and not to strive for hegemony or dominance.

To note, China is entangled in territorial and maritime disputes in the South China and East China Seas. With its salami slicing tactic, it is constantly involved in military muscle flexing to safeguard its interests. Following suit in the Indian Ocean, China is slowly shedding the dormant mantle to become an active player. China’s push forward into the Indian Ocean is driven by a two-fold interest: first, its quest for energy security as 80 percent of China’s energy imports pass through the Indian Ocean into the Straits of Malacca. To note, the Indian Ocean is home to China’s important Sea Lines of Communications (SLOCs), thus raising the stakes for China to maintain security and stability in the IOR to avoid any instances of being choked. Secondly, there is an ambition to attain the great power status, which can be achieved by bolstering a dominant role through power projection and gaining freedom of navigation in the crucial waters of the Indian Ocean. This is catalysed by the Chinese Dream of the “great rejuvenation of the Chinese nation”.

In this context, the quandary lies in assessing how long Beijing will maintain its benign posture in the Indian Ocean given the changing systemic and security dynamics. The current political fallouts given the Doklam standoff with India at the India-China-Bhutan tri-junction, along with the pressing concerns of North Korea’s rising nuclear belligerence has put Beijing into a fix. It remains certain that China’s actions and presence in the Indian Ocean will only rise, and not fade away. With Djibouti, China’s ambitions in the Indian Ocean have become more pronounced. This is not merely rhetorical; it is rather a reality of great power politics that will undoubtedly be played out in the 21st century in which the centre of gravity has shifted to the Indian Ocean.

*Amrita Jash is Editor-in-Chief at IndraStra Global, New York. She pursued a Ph.D in Chinese Studies from the Centre for East Asian Studies, School of International Studies, Jawaharlal Nehru University, New Delhi. The views expressed by the author do not necessarily reflect those of the NMF or the Government of India. She can be reached at ajash108@gmail.com

‘INDO-PACIFIC’ WAS ALWAYS ABOUT CHINA? YES, BUT LET’S NOT CROSS THE ‘RED... Scroll to top