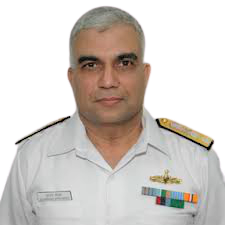 RADM Shrikhande graduated from the NDA. His qualifications include Masters from the Soviet Naval War College, St Petersburg (1985-88) in ASW and Weapon Engineering; Msc From Staff College(1995), MPhil from the Indian Naval War College and highest distinction from the US Naval War College( 2003). He has served long years at sea, commanded three ships and been defense attaché in Australia and to other South Pacific nations. Ashore he has been commander War Room at NHQ, headed the IN’s Tactical Evaluation Group and was a founding member as a captain of the IN’s Strategy and Operations Council. In flag rank he has been head of Naval Intelligence; Chief of Staff of SNC; Joint HQ staff duties and in the nuclear forces command and Flag Officer Doctrines and Concepts before requesting early retirement in July 2016. As a veteran he continues teaching at several institutions including the NDC, all War colleges and the CDM as well as the NDA and INA spanning strategy, operational art, RMA, Peloponnesian War, Indo-Pacific geopolitics, leadership and ethics. He has participated in Track 1.5 discussions with China and the US and is associated with the Vivekananda International, Observer Research and the National Maritime Foundations, National Security Council Secretariat as well as other institutions. He has presented papers in several notable Indian and international conferences and workshops and is pursuing his PHD at Mumbai University in sea-based nuclear deterrence. He writes for a few Indian and foreign portals and journals from time to time. He lives in Goa where he is associated (in honorary capacities) with the State Ex- servicemen’s welfare committees and the Navy Foundation.

Author: In recent days, some newspapers in Goa have reported on issues of No Objection Certificates (NOC) that the Indian Navy provides for certain buildings, development and infrastructure at a specified radius around the Naval Air Station (NAS), Dabolim. As is widely known, NAS (Dabolim) is also the international airport at Goa. All airports in the […]

Author: On 04 Jun this year, the US Navy (USN) took a rather unusual step in reintroducing the Warrant Officer-I (W-I) rank and inviting  applicants in this rank for cyber warfare.  The USN has had a complex history of warrant ranks as opposed to commissioned and non-commissioned ranks. The details of this history are not of […]