India’s commitment to a regional transition from the existing ‘brown economy’ to an enduring ‘blue economy’ is an abiding feature of its maritime policy, which is encapsulated by the acronyms SAGAR (Security and Growth for All in the Region) and IPOI (Indo-Pacific Oceans Initiative).  These twin concepts also underscore India’s willingness and ability to augment global efforts to provide ‘public goods’ within the predominantly, though not exclusively, maritime expanse of the Indo-Pacific.  New Delhi is deeply conscious and appreciative of the fact that the several forms and shapes of regionally beneficial maritime strategies are not limited to conceptualisations and decisions of a single country but are part of an inclusive process whose inclusivity incorporates voices from the entire Indo-Pacific.

For its part, the Indian Navy recognises that it is an indispensable part of the harmony that constitutes the ‘Indian voice’ in this common regional endeavour to collectively manage and govern an Indo-Pacific that is peaceful, stable, and founded upon a rules-based order in which the rules emanate from international consensus.  As such, it sees itself as being deeply invested in the actualisation of each of the seven intricately connected spokes or pillars of the IPOI, as articulated by India’s Prime Minister, Shri Narendra Modi in Bangkok, on 04 November 2019, at the 14th East Asia Summit (EAS).  It is, therefore, appropriate that the 2022 edition of the Indo-Pacific Regional Dialogue (IPRD-2022) is centred upon the IPOI and its operationalisation, with particular but not exclusive focus upon the pillar of ‘Maritime Security’ (or more accurately, ‘holistic’ maritime security).

India’s approach to management and governance of the maritime expanse of the Indo-Pacific is guided by and deeply respectful of the efforts of the United Nations Secretariat and specifically upon the Division of Ocean Affairs and the Law of the Sea (DOALOS).  The Indian Navy is mindful of the prime ministerial definition of holistic maritime security being freedom from threats arising in or from or through the seas, irrespective of whether these threats are manmade or natural ones or, indeed, a combination of both.

The IPOI precisely reflects this definition even as it draws specific attention of all maritime users of the Indo-Pacific to the interconnectedness of all seven spokes or pillars: Maritime Security, Maritime Ecology, Maritime Resources, Disaster Risk-reduction and Management, Trade-Connectivity and Maritime Transport, Capacity-building and Resource-Sharing, and Science, Technology and Academic Cooperation.  These broad thrust lines and the web of interconnectedness that defines them has been schematically summarised in Figure 1. 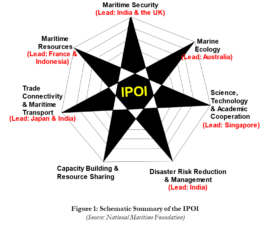 Given the ability of the Indian Navy to be a significant enabler of India’s commitment to provide public goods within and through the maritime domain, it is unsurprising to find the Navy in the very vanguard of strategies being formulated to ensure inclusive maritime security and maritime-enabled economic and societal growth in all littoral and island States of the huge oceanic swath extending from the eastern shore of Africa to the western shore of the Americas.  The IPRD provides an appropriate platform upon which the process of actualisation of the seven thrust areas embodied by the IPOI initiative may be provided requisite specificity.

IPRD-2022 will be conducted in physical format in New Delhi, through six professional sessions spread over the three-day period covering the 23rd, 24th, and 25th of November 2022 and will, through the agency of a series of globally renowned speakers and eminent panellists, explore how the areas of maritime cooperation envisaged in the IPOI could be optimally and inclusively operationalised.