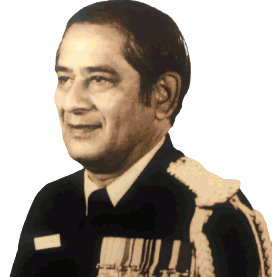 Vice Admiral Kewal Krishan Nayyar, Param Vishisht Seva Medal, Ati Vishisht Seva Medal, was commissioned into the Indian Navy on the first day of January in the year 1951. Right from his earliest days in the navy, he established a reputation for conceptual brilliance, coupled with a well-adjusted “Seaman’s Eye” for detailed planning, and a consistent demonstration of outstanding tactical-, operational- and strategic acumen in the execution of his plans. Successive stints in the Directorate of Naval Plans at Naval Headquarters (as it was then known) honed his analytical dexterity and financial skills to a fine edge. However, he was certainly no armchair admiral, as his distinguished sea-going tenures clearly demonstrate. Besides commanding several frontline surface combatants, including the Rana and the Delhi, the two cruisers that were, at that point in time, very much the Indian Navy’s pride and joy, he had the rare distinction of commanding both, the Eastern and the Western Fleets of the Indian Navy. Vice Admiral Nayyar retired in 1986, after having helmed the Southern Naval Command as its Flag Officer Commanding-in-Chief, and, having tenanted the high post of the Vice Chief of the Naval Staff.
His retirement from active duty did not in any way diminish his passion to bring about a restoration of that degree of Indian primacy that drew so many powers — pre-colonial kingdoms and European nation-states alike — to India’s shores like so many moths to a brilliant, dancing maritime flame. He was recognised, respected and greatly valued for his outstanding intellect and his vast and varied experience. As such, he enjoyed the confidence of the highest decision-making levels of the Government of India. Vice Admiral Nayyar began his second innings in setting up and strengthening the sphere of strategic thinking and national security in India. He was both a member of the National Security Advisory Board and the Government Committee on Defence Expenditure. He also chaired the panel set up by the 11th Finance Commission to recommend defense expenditure for the period 2000-2005. It would not be an understatement to say that Vice Admiral Nayyar was the fountainhead of the institution of think tanks in India. He helped establish many of them such as the National Maritime Foundation (NMF) and the Observer Research Foundation (ORF), and was the Founder Chairman for the Vivekananda International Foundation (VIF). He became one of the trustees of the VIF in May 2010 and was subsequently elected by the VIF Trust as Chairman of the Vivekananda International Foundation in June 2010. Along with Mr Ajit Doval and Mr S Gurumurthy, his leadership was instrumental in establishing VIF as a nationalist think tank, bringing some of the best minds in the country under one roof.
He was deeply involved in non-official Neeemrana Dialogues with Pakistani strategic thinkers. His engagement with the Saturday Club through his excellent insights and sagely guidance inspired and enriched the lives of many who were associated with it.
His intellectual character, when he could deal with completely contradictory opinions, keep them on board, argue his case and yet keep evolving, was a testament to his leadership. There was nothing that didn’t interest him, from environmental issues to economic matters. He was there and he had opinions, and a very clear understanding. He was known to throw new light on many issues; he was able to guide the community and to draw out the best from it. There was always a sense of humour, a ready smile and zero anger.
Vice Admiral KK Nayyar breathed his last on September 18, 2018. It was not the number of years in his life, but the life he put in those years that made Vice Admiral KK Nayyar an endearing and charismatic mentor figure for the countless many. His loss is irreparable. The Vivekananda International Foundation offers heartfelt condolences to his wife and family. But even in this grief, his spirit, passion and affection, and his strong nationalist outlook, stand like a pillar in the passing winds of history.
His focus upon such strategies and plans as could be seamlessly transformed into practical execution was unwavering. Having been a principal architect in the creation of the NMF, he pushed it to meaningfully contribute to strategic planning and the flawless execution of carefully-formulated strategic, operational and tactical action within the maritime domain.