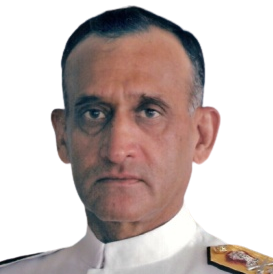 Admiral Arun Prakash served as India’s 20th Naval Chief and Chairman Chiefs of Staff. An aviator by specialisation, during his 40 year career, he commanded a carrier-borne fighter-squadron, a naval air station and four warships; including the aircraft-carrier INS Viraat. He has also logged over 2500 hours in fighters, patrol aircraft and helicopters.

In flag rank he commanded the Eastern Fleet, the National Defence Academy, the Andaman & Nicobar Joint Command and the Western Naval Command. On staff, he served as the head of the Aviation and Personnel Branches of the navy and as the Vice Chief of Naval Staff. During his tenure at the helm, the navy saw many initiatives being launched in the fields of doctrine, strategy, transformation and foreign maritime cooperation.

He is a graduate of the IAF Test Pilots School, Defence Services Staff College and the US Naval War College. During the 1971 War, he was awarded the Vir Chakra while flying with an IAF fighter squadron in the Punjab.

Post-retirement, he served two terms as a member of the National Security Advisory Board and was Chairman of the National Maritime Foundation. He served on the 1999 Arun Singh Task force as well as the Naresh Chandra Committee on national security reforms. He lives in Goa, and writes and speaks on strategic and security related topics.

The Admiral holds the distinguished chair at the college and is the guiding light for research carried out by faculty and course participant.

On 15 Sep,08, Admiral Arun Prakash (Retd) took over as the second Chairman of the National Maritime Foundation (NMF), New Delhi, which is India’s premier maritime think tank. The Foundation has benefited immensely from his vast experience