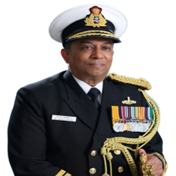 Vice Admiral M.P.Muralidharan, an alumnus of National Defence Academy, Khadakvasla, was commissioned into the Indian Navy on 01 Jan 1975.  He is a specialist in Navigation and Direction and also holds a post graduate degree in Defence Studies.  In a career of almost four decades, the Admiral has held several key Operational and Staff appointments. He has commanded three warships including the Guided Missile Destroyer Ranvijay and has been Fleet Operations Officer of the Western Fleet and Principal Director of Naval Operations at the Integrated Headquarters of the Ministry of Defence (Navy).He was also Directing staff at Defence Services Staff College (Wellington), Naval Assistant to the Chief of the Naval Staff and Naval Attaché, at the Embassy of India, Moscow.

On elevation to Flag Rank, as Rear Admiral he was the Flag Officer Sea Training at Kochi, Chief of Staff, Western Naval Command at Mumbai and also held the operational appointment of the Flag Officer Commanding, Maharashtra and Gujarat Naval Area.  On promotion to Vice Admiral, he became the first commandant of the Indian Naval Academy at Ezhimala. Subsequently, he became the Chief of Personnel at Naval Headquarters prior to taking over as the 19th Director General of the Indian Coast Guard from where he retired in Feb 2013.

As the Director General Indian Coast Guard, he was a member of various institutional and governmental committees, which included Director on the Board of Goa Shipyard Ltd and Invitee to the Meetings of the Defence Procurement Board and Defence Acquisition Council. He was also Chairman of numerous Coordination Committees at the national level, which included the Offshore Security Coordination Committee (OSCC), National Oil Spill and Disaster Contingency Plan (NOSDCP) and National Maritime Search and Rescue (NM-SAR) Board.

Post retirement, the Admiral was appointed by the President of India as a Member of the Armed Forces Tribunal at its Regional Bench at Kochi, an appointment equivalent to a sitting Judge of a High Court. During his tenure of four years, the Admiral authored nearly 500 judgments which included some land mark decisions. Apart from the Bench at Kochi, he also sat on the Regional Benches of the Tribunal at Guwahati, Mumbai and Jaipur.

He has keenly pursued numerous scholastic avenues during his career in conjunction with his primary responsibilities. He has been a contributor to Armed Forces journals and periodicals and has been a speaker and panellist at various Seminars and Conferences. These include, among others, the National Defence College, New Delhi, College of Defence Management, Secunderabad and National Maritime Foundation, New Delhi. He is also a member of various strategic study societies and institutions such as the National Maritime Foundation, Institute for Defence Studies and Analyses and United Service Institution of India.

The Admiral was awarded the Ati VishistSeva Medal (AVSM) twice by the President of India and is also a recipient of the Nao Sena Medal (NM).