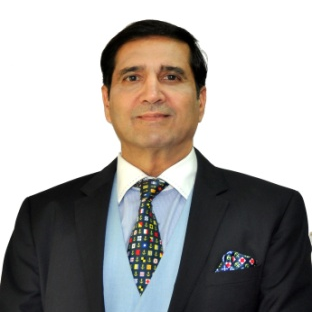 His illustrious career began with being adjudged the ‘Best Cadet’ and winning of the coveted ‘Telescope’ during his sea training onboard INS Delhi. He was commissioned in the Navy on 01 Jan 75 and went on to bag the ‘Sword of Honour’ for his course. He was baptised in the art of navigation when, as a young Lieutenant armed with a sextant and the keen eyes of an enthusiastic navigator , he sailed from the port of Riga in the Baltic Sea to the shores of Mumbai. With the induction of the Sea Harrier jump-jets into the Navy, he was selected to undergo the Sea Harrier Direction Course at Yeovilton, UK. His tenures at Indian Naval Air Squadron 300 and the aircraft carrier Vikrant shaped the future of direction specialisation in the Navy.

Besides serving as Indian Naval Advisor at the High Commission of India, London, he has also served as Chief Staff Officer (Operations) of the Western Naval Command (based at Mumbai) and the Chief of Staff at Headquarters Eastern Naval Command (based at Visakhapatnam) and subsequently had the distinction of commanding his alma mater, the National Defence Academy, as the Commandant. The Admiral assumed charge as the Vice Chief of the Naval Staff in Aug 11 and was subsequently promoted as the 22nd Chief of the Naval Staff of the Indian Navy on 17 Apr 14. He retired from the Navy on 31 May 16 after a distinguished career of 42 years in uniform.

On 25 Nov 16, Admiral RK Dhowan (Retd) took over as the fifth Chairman of the National Maritime Foundation (NMF), New Delhi, and served till 06 June 2019. The Foundation has benefited immensely from his vast experience in the Indian Navy in general and in specific, formulation of a wide range of maritime strategic publications. Such as IN Maritime  Cooperation Roadmap (2014), IN Space Vision (2014), Indian Navy in the 21st Century: Maritime Security for National Prosperity (2014), IN Maritime Capability Perspective Plan (2015), IN Maritime Infrastructure Perspective Plan (2015), IN Indigenisation Plan (2015), Science and Technology Roadmap (2015), Ensuring Secure Seas: Indian Maritime Security Strategy (2015), Indian Maritime Doctrine (updated 2015), Maritime Heritage of India (2016) and United Through Oceans: International Fleet Review 2016. In his new role as both the practitioner and promoter of broader maritime thinking and fresh strategic perspectives, the Admiral has been lecturing extensively at all leading military colleges, think-tanks and academia in India, as well as at various apex-level institutions abroad, articulating his views on how the maritime strategic landscape has been changing in the world and the leading role India as a resurgent maritime nation would play in the Indo-Pacific region. Under his visionary articulation, the National Maritime Foundation is presently embarked on the mission for the development of strategies for the promotion and protection of India’s maritime interests, ranging from development of ports, shipping and shipbuilding to island development and renewable sources of ocean energy. In addition various aspects of harnessing the ‘Blue Economy’ and their advocacy to all stake-holders, both Governmental and Non-Governmental.