You are here: Home / Adm A K Chatterji 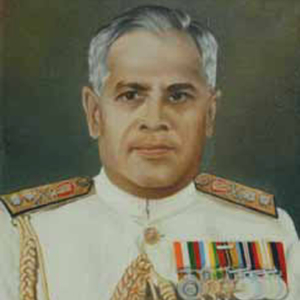 “The Admiral A K Chatterji Fellowship” is offered to encourage serving naval officers and civilian researchers alike, to undertake research on maritime issues of relevance.  The Fellowship was instituted by the family of the late Admiral AK Chatterji, PVSM, AVSM, IN, who was, and remains in memory, an inspiration to the Indian Navy.

Born in Dhaka on 22 November 1914, the late Admiral Adhar Kumar Chatterji, PVSM, AVSM, IN (Retd), was the Chief of the Naval Staff (CNS) from March 1966 to February 1970 and was the very first officer to hold the rank of Admiral in the Indian Navy.  He was one of the first Indian cadet-entry officers to join the Royal Indian Navy in 1933 and was commissioned into the Royal Indian Navy as a Sub Lieutenant on 01 September, 1935.

Promoted to the rank of Lieutenant on 01 September, 1938, he specialised in Torpedo and Anti-Submarine (TAS) warfare and fought in the Second World War, while serving aboard a variety of Royal Navy and Royal Indian Navy warships, both in the Atlantic and the Indian Ocean. He was also the only Indian officer to be appointed as an ‘Instructor’ in the Royal Navy’s shore-establishment HMS Osprey, which was, at the time, the British Royal Navy’s professional-training school for Anti-Submarine Warfare (ASW).  In 1944, he assumed command of the warship HMIS Kathiawar, which was a Fleet Mine-Sweeper, and participated in the Burma Campaign. An acting Lieutenant Commander at the end of the war, he was promoted to substantive Lieutenant Commander on 01 September 1946.  In 1947, after attending the course at the Naval Staff College, UK, he was appointed as the Director of the ‘Directorate of Naval Plans and Intelligence’ at Naval Headquarters, New Delhi, in the rank of Commander.  It is fair to say that he drew-up the first comprehensive blueprint for the transition from the Royal Indian Navy to the Indian Navy and the future growth of the latter.  With his recent first-hand experience of the Second World War, the Navy that he envisaged for independent India would function in major roles: to safeguard Indian shipping, to ensure delivery of supplies, to prevent any landing by the enemy, and to support the Indian Army in seaborne and amphibious operations.  It would comprise two fleets, each centred upon a Light Fleet Cruiser, and would incorporate naval-aviation and submarine assets.  Sadly, the fledgling India of the time could not afford the naval assets  needed, particularly in the face of an extraordinarily condescending attitude adopted by the British admiralty, which saw the Indian Navy solely as a coastal-defence force that would continue to rely upon the Royal Navy for oceanic and comprehensive maritime defence.  From November of 1950 to January of 1953, he served as the Naval Adviser in the High Commission of India in London, before returning to India and taking-up the command of the Indian Navy’s pride and joy — the light-cruiser, INS Delhi.

He was then appointed as the Commodore-in-Charge, Bombay, with the acting rank of Commodore, a position he held for two years.  (The ‘Bombay Command’ eventually evolved into the present ‘Western Naval Command’). Upon completion of the senior-leadership course at the Imperial Defence College, London, Commodore Chatterji was appointed the Deputy Chief of the Naval Staff (DCNS) on 08 February, 1958.  While tenanting this prestigious appointment, he was promoted to the rank of Rear Admiral (on 05 March, 1959).  In May of 1962, he demitted the office of the DCNS and assumed command of the Indian Fleet.  In January 1964, he was promoted to the acting rank of Vice Admiral and took over as the Commandant of the National Defence College.

Admiral Chatterji retired on 28 February 1970, after 37 years of meritorious service.  Even after his retirement, Admiral Chatterji continued to support the several endeavours of the Indian Navy and strongly advocated naval intellectual development as the foundation to the sustained and coherent resurgence of India as a maritime power. Right up to the day of his passing (the admiral left for his heavenly abode on 06 August 2001) he remained a fervent advocate of India’s maritime growth and the leadership that the Indian Navy needed to give to the intellectual development and encouragement of Indian maritime thought.

It was to honour this drive for intellectual growth and research-based rigour that the family of the late Admiral Chatterji instituted “The Admiral A K Chatterji Fellowship” in 2011.

The fellowship, which has since been entrusted by the Indian Navy to the National Maritime Foundation (NMF), financially supports  sequential research projects, each of 18-month durations, relevant to India’s maritime development.  Under this fellowship, which is offered to serving naval officers or young academics, three research-projects have been completed and published in the form of full-fledged books, while the fourth is currently in progress. 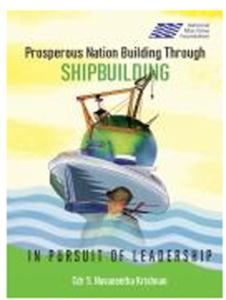 Subject of Project:“Shipbuilding: Nation-building through Shipbuilding” 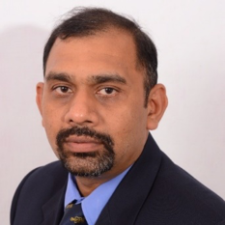 An alumnus of IIT Kharagpur, Commander S Navaneetha Krishnan, IN (Retd) is an experienced professional with more than two decades of experience in shipbuilding, ship repair and ship design projects in the Indian Navy. A Naval Architect and Metallurgical engineer with an MBA in Finance and Project Management, he served in the Indian Navy with great distinction for well over two decades. His past work-experience includes tenures at a naval ship-repair yard, the Directorate of Naval Design (Surface Ship Group), and, Directorate of Naval Design (Submarine Design Group). He is currently (2020) in Chennai, where he is a Senior Deputy General Manager in the Shipbuilding Division of Larsen & Toubro (L&T). He has published and presented a number of technical papers in national and international journals and professional forums. He has also published a book on efficiency-measurement in ship-design organisations. 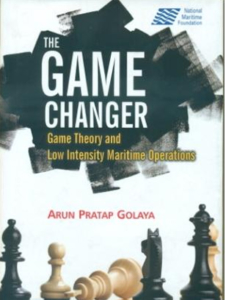 Subject of Project: “The Game Changer: Game Theory and its application to Anti-Piracy, Maritime Terrorism and LIMO” 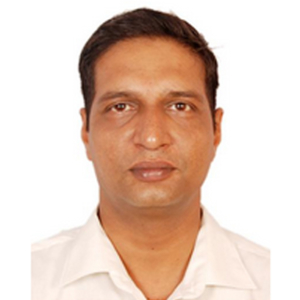 Commodore Arun P Golaya is an alumnus of the National Defence Academy and was commissioned into the Indian Navy on 01 January, 1992. The officer has specialised in Navigation, Aircraft Direction, and Naval Operations. In addition to serving afloat in frontline warships, including the INS Mumbai and the INS Godavari as the Navigating Officer, the officer has commanded three ships including one on deputation to the Coast Guard. During his command of the Diving Support Ship, the INS Nireekshak, the ship was awarded a coveted ‘Unit Citation’. He has held a number of important appointments ashore and has been an instructor in the Navigation and Direction School, Kochi. He has also tenanted the post of Joint Director in the Directorate of Net-Centric Operations, at the Integrated Headquarters of the Ministry of Defence (Navy). A keen writer and analyst, he authored/co-authored a number of professional articles and has contributed extensively to five books on professional subjects, all of which have been widely circulated within the Navy. He completed a short but rewarding tenure as a Research Fellow at the National Maritime Foundation prior to taking up his current assignment as Defence Specialist in the National Security Council Secretariat. The officer was awarded the Vishist Seva Medal (VSM) for distinguished service on 26 January 2012. 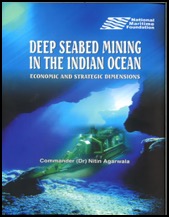 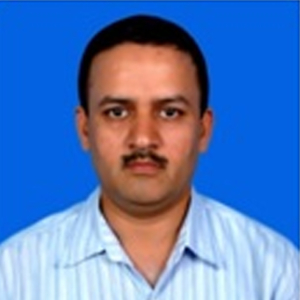 Commissioned into the Indian Navy in 1993, Captain (Dr) Nitin Agarwala is a serving Naval Officer, and a Naval Architect from the Cochin University of Science and Technology (CUSAT).  He is an alumnus of the Indian Institute of Technology (IIT), Delhi, as also IIT, Kharagpur.  In his naval career of over 22 years, the officer has gained rich and varied experience as a user, an inspector, a maintainer and a policy-maker, and, a key-member of the design-team for naval warships.  As a member of the faculty of CUSAT’s Department of Ship Technology for four years, he has taught various subjects at both B.Tech and M.Tech programme-levels, while also guiding a number of research projects. He has published over 26 professional papers in various conferences and journals of national and international repute.  His areas of interest are wave-structure interaction, acoustic-structure interaction, hydroelasticity-related ship structure problems, and corrosion-problems associated with ships.

The fourth research project under the “Admiral AK Chatterji Fellowship” is being undertaken by Captain Kamlesh Kumar Agnihotri, IN, who is currently a Senior Fellow at the Centre for Joint Warfare Studies (CENJOWS), New Delhi, and a keen ‘China Watcher’. His ongoing research is on the subject “Leveraging of High Technology Developments by China in Military and Maritime Domain: Impact on the Indian Ocean Regional Security”.

As in the past, it is intended to consolidate and convert the author’s research into a book, which will be released on 22 November 2020, the birth anniversary of Admiral AK Chatterji.

This date will, henceforth, be the date on which the books emanating from all successive research projects under the “Admiral AK Chatterji Fellowship” will be released. 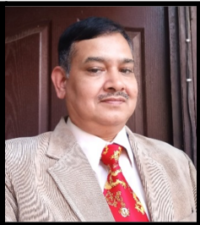 Captain Kamlesh K Agnihotri is presently a Senior Fellow at the Centre for Joint Warfare Studies (CENJOWS), New Delhi. His specialised field of work is on Chinese Defense Forces, particularly the Chinese Navy. Hiscurrent areas of Study include Chinese maritime issues, Indian Ocean security matters and complex dynamics in the broader Indo-Pacific Region. Having followed the Chinese economic and military ascendency for 13 years since 2005, he has become quite well versed in its international relations and foreign policy interaction with rest of the World.The Officer has worked at the National Maritime Foundation (NMF), New Delhi, a premier think tank of the Indian Navy, from Jan 2009 till Mar 2014, where he was in-charge of the China Cell. While at NMF, he contributed a great deal to the informed discourse on security matters relating to the Chinese maritime domain in India and abroad, by publishing four books, writing chapters in other books and penning research articles in the various think tanks’ Journals. His latest Book is titled “The Strategic Direction of Chinese Navy: Capability and Intent Assessment” (2016).He has also added value to his security studies by acquiring Advanced Diploma in Chinese language; and attending a counter-terrorism course in Dhaka, Bangladesh. He is a naval missile and Gunnery specialist. He commanded a Landing Craft Utility ship (LCU) at the Andaman and Nicobar Islands in 1997. He also holds a Post Graduate Diploma qualification in Business management.