National Maritime Foundation (NMF) was amongst the 21 organisations that were awarded the first-ever Coalition for Disaster Resilient Infrastructure (CDRI) Fellowship (2021-22) in March 2021, for its project on, Assessing Climate Change Risks-to and Resilience-of India’s Seaport Infrastructure and Operations. The project was completed on 30 June 2022 and the report will be released on 04 October 2022.

TITLE OF THE REPORT:

About CDRI and the fellowship:

The Prime Minister of India launched the Coalition for Disaster Resilient Infrastructure during his speech at the UN Climate Action Summit in New York, USA on 23 September 2019.  It is an international partnership of national governments, UN agencies and programmes, multilateral development banks and financing mechanisms, the private sector, and knowledge institutions that aims to promote resilience of new and existing infrastructure systems to climate and disaster risks in support of sustainable development.  The CDRI announced the 2021 fellowship programme on 01 September 2020 to promote research and innovation on disaster resilient infrastructure.  The fellowship provides financial aid of up to US$ 10,000 for a maximum period of 12 months during which the project should be completed.  For the 2021 CDRI Fellowship programme, 143 applications were received out of which 21 winners were awarded the 2021 fellowship. 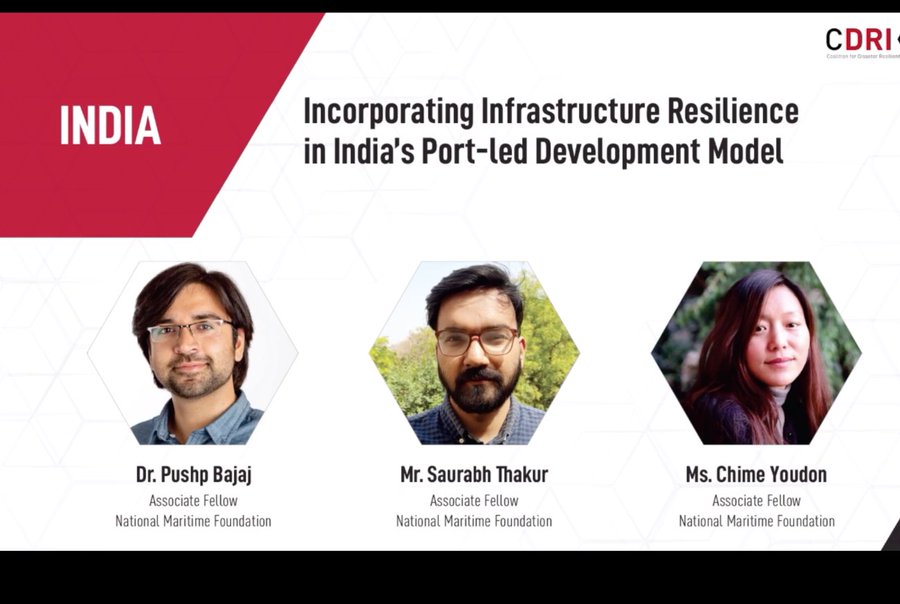 Following the launch of the nation-wide “port-led development” initiative, the SAGARMALA, in 2016, the Government of India has taken a slew of measures to enhance the capacity and capability of India’s maritime sector and facilitate the transition from a ‘Brown Economy’ to a ‘Blue Economy’.  In order to ensure long-term security and sustainability of the proposed and existing maritime infrastructure, we must address the growing climate-change-induced threats of sea level rise and intensifying extreme weather events.  This study will create a climate-resilience-centred policy-framework comprising exhaustive guidelines and tools to make our port infrastructure, including support infrastructure and critical supply chains, more resilient in the face of future uncertainties.

The NMF researchers who will be carrying out the study under this fellowship are: