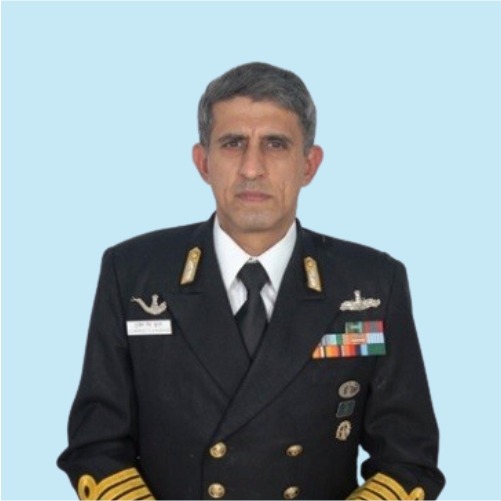 Captain (Dr.) Gurpreet S Khurana is a serving missile warfare specialist and ship’s diver of the Indian Navy with nearly 30 years of commissioned service. He has held a variety of key staff and operational appointments and commanded two warships, which includes the Fast Attack Craft INS Tarmugli, which he commissioned in the Andaman & Nicobar Islands in 2002.

Since his Research Fellowship at IDSA (2004-2008), he has authored more than 50 papers on China’s maritime strategy; naval, strategic and geopolitical issues; maritime law and maritime history. He formulated seminal naval doctrine and strategy documents like Indian Maritime Doctrine 2009 and Handbook on Law of Maritime Operations in three volumes (2013), receiving the naval chief’s commendation. Accredited to be the first to use the term ‘Indo-Pacific’ in the contemporary geopolitical discourse, he has authored three books: “Maritime Forces in Pursuit of National Security” (2008), “Porthole: Geopolitical, Strategic and Maritime Terms and Concepts” (2016) and “The Indo-Pacific Region: The Emerging Geopolitical and Security Environment” (2018). He has also co-edited 11 books. From 2014 to 2019, he was Executive Director of NMF. He represented India as co-chair of the CSCAP Study Group on maritime and aeronautical SAR (2015-16), and as leader of Indian delegation at 4th Indian Ocean Dialogue at Abu Dhabi in Oct 17. He takes lectures for military higher command courses, and for University students in India and abroad. He is currently heading the Navy’s Centre on China Maritime Studies at Visakhapatnam, and is also a visiting Professor at the Naval War College, Goa. His work is available at https://independent.academia.edu/khurana.

Author: It has now been over a decade since the Mumbai terrorist attacks of November 2008 (26/11) undertaken by the Pakistan-based Lashkar-e-Tohiba (LeT) group. Since then, considerable efforts have been made to streamline India’s coastal security, including fostering functional synergy among the various agencies involved. However, recent reports indicate that the coastal security architecture is undergoing […]

Author: The  Belt  and  Road  Initiative  (BRI)  was  announced  by  President  Xi  Jinping  in  2013, comprising both the land-based Silk Road Economic Belt (launched in August 2013) and the 21st  Century  Maritime  Silk  Road  (introduced  in  September  2013).  The  initiative  was showcased in a manner that was too appealing to be ignored by the countries of […]

Author: Oddly, the Bay of Bengal Initiative for Multi-Sectoral Technical and Economic Cooperation (BIMSTEC) is a sub-regional grouping named after a sea body, but the graphics in its logo are devoid of blue colour. Of course, the etymology of BIMSTEC originated from the names of its members in 1997, but the fact remains all its members […]

Author: Introduction  The epic sea battles between aircraft carriers never recurred after the Second World War. In the post-war period, most carriers began to retire without even having participated in battle. Many countries that possessed carriers or were aspiring to do so thus began to re-assess the military-strategic utility of such platforms in the radically altered […]

Author: In the taxonomy of ‘Geopolitics’ and ‘Geo-strategy’, the prefix ‘geo’ refers to a country’s strategic geography, which is the core underpinning of its national-strategy. Geopolitics involves the satiation of the country’s geo-economic and other objectives, which are sought to be met through coherent geo-strategies in various domains. The military domain merely represents an ‘assurance’ and […]

Author: (This is a revised extract of chapter titled “India’s Strategic Landscape, Hybrid Threats and Likely Operational Scenarios” jointly authored by Gurmeet Kanwal, Syed Ata Hasnain, Gurpreet S Khurana and Manmohan Bahadur, in Satish Kumar (ed.) India’s National Security: Annual Review 2016-17 (Routledge India: December 2017) Introduction To address its maritime dimension, it is essential to […]
Author:   This is part three of a three-part series on China’s naval power  (PART 3: TACTICAL LEVEL) As introduced in the Part 1, so far, most analysis of China’s naval power worldwide has focused on the PLA Navy’s existing and projected force-levels, and their associated hardware inductions and technological progression, with little emphasis on the […]

Voice of america
Author: On 06 August 2017, the foreign ministers from the Association of Southeast Asian Nations (ASEAN) and China met in Manila, The Philippines, and adopted the “Framework of the code of conduct (CoC) in the South China Sea (SCS)”. The framework is meant to lead eventually to the CoC comprising a set of rules outlining certain […]
Author:   This is part two of a three-part series on China’s naval power (PART 2: OPERATIONAL LEVEL) As introduced in Part 1, so far, most analyses of China’s naval power worldwide have examined the PLA Navy’s existing and projected force-levels, and its associated hardware inductions and technological progression, with little emphasis on the ‘intangibles’ of […]

CIMSEC
Author:   Within five years after the China commissioned its first Soviet-origin aircraft carrier Liaoning in September 2012, it launched its first-ever domestic carrier – the Type 001A – on 26 April 2017. The new carrier is likely to be commissioned in 2020 as Shadong. Even though the Liaoning and the Type 001A are medium-sized conventionally […]
Author: Since 2010, the concept of ‘Indo-Pacific’ has gained increasing prevalence in the geopolitical/ strategic discourse, and is now being used increasingly by policy-makers, analysts and academics in Asia and beyond.[1] It is now precisely a decade since the concept was proposed by the author in 2007. Although the Australians were using this term earlier, it […]

The economic times
Author:      On 20 January 2017, Mr Donald Trump assumes office as the 45th President of the United States (U.S.). Six years ago in 2011, his predecessor, President Barak Obama launched the ‘Rebalance to Asia’. Among the key objectives of the policy were to engage with the economically rising Asia-Pacific, maintain U.S. supremacy in this […]

Image Credits: Dhaka Tribune
Author: On 14 November 2016, Bangladesh Navy (BN) took delivery of two old refurbished Chinese Type 035G Ming-class diesel-electric submarines. As part of the US$ 203 million contract signed in 2013, the submarines were handed over to the BN crew during a ceremony at the Liao Nan Shipyard in China’s Dalian city. The submarines are slated […]

Image Credits: DNA India
Author: On 29 August 2016, during the visit of the Indian Defence Minister Manohar Parrikar to Washington DC, India and the United States (US) signed the Logistics Exchange Memorandum of Agreement (LEMOA). Essentially, LEMOA is only a ‘functional’ agreement ‘to account for’ the essential supplies and services that one country would provide (at its port or […]

Image Credits: Permanent Court of Arbitration
Author: On 12 July 2016, the Tribunal constituted at the Permanent Court of Arbitration (PCA) at The Hague under Annex VII of the United Nations Convention on Law of the Sea, 1982 (UNCLOS) issued its decision in the arbitration instituted by the Philippines against China. It relates to the various legal issues in the South China […]

Image Credits: Financial Express
Author: During the ‘Raisina Dialogue’ held in March 2016 at New Delhi, Admiral Harry Harris, the Commander of United States (US) Pacific Command (CINCPAC) referred to the first ever tri-lateral (Australia, Japan and India) 1 ministerial discussions held in September 2015, which had addressed “maritime security – including freedom of navigation patrols”, and proposed “expanding this […]

Image Credits: The Brookings Institution
Author: On 4th February 2016, India and China held their first-ever „Maritime Affairs Dialogue‟ at New Delhi. While the Indian side was led by the Joint Secretary (Disarmament and International Security Affairs) in the Ministry of External Affairs (MEA), the Chinese delegation was led by the Assistant Minister of the Chinese Ministry of Foreign Affairs (MFA). […]

Image Credits: US Naval Institute
Author: In December 2015, China commissioned Hefei (174) – the third Type 052D guided- missile destroyer into its navy. 1 The warship represents the most advanced surface combatant ever operated by the PLA Navy, and comparable to the best in the world. It is armed with potent long-range missiles like the HHQ-9 (anti-air), the YJ-18 (anti-ship), […]

Image Credits: Institute for New Economic Thinking
Author: The concept of ‘Common Public Good(s) at Sea’ has lately gained much traction in the context of maritime safety and security in the Afro-Asian swath of the Indo-Pacific region.i As the centre-of-gravity of world’s economic power shifts eastwards, the salience of this predominantly maritime-configured region is increasing, and the attendant emphasis on security and stability […]

Image Credit - U.S. NAVAL INSTITUE
Author: China  has  been  issuing  Defence  White  Papers  biennially  since  1998.  The  ninth  White Paper of 2014 titled ‘China’s Military Strategy’  was released recently in May 2015. This essay seeks to analyse the salient aspects of the document, particularly in context of the preceding document of 2012 released in April 2013. In comparison to the Defence […]