You are here: Home / Articles / AUSTRALIAN PRIME MINISTER’S VISIT TO INDIA: AN ASSESSMENT IN THE... 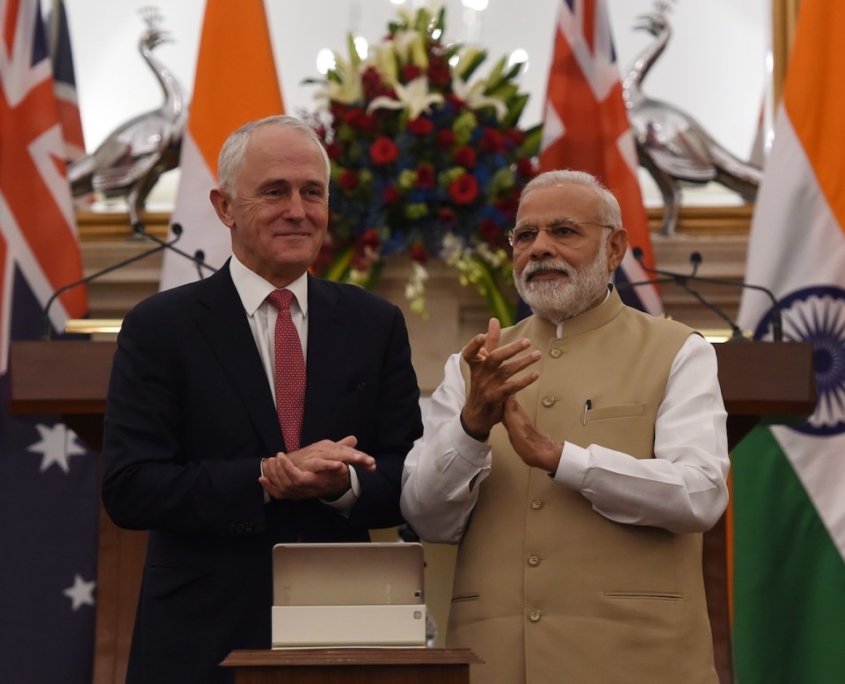 Australian Prime Minister’s visit to India:
An Assessment in the Maritime Context

India is trying to bolster its partnerships throughout the vast swathes of the maritime Indo-Pacific region. Owing to the recent emphasis on the maritime domain, India is reinvigorating existing partnerships, while forging new ones. India warming up ties with Australia is an example.

The Joint Statement released during Australian Prime Minister Malcolm Turnbull’s visit to New Delhi April 9-12, 2017 reflects the expansion of India’s maritime interests. The Joint Statement also reiterates the shared interests of India and Australia in “enhancing the regional cooperation in maintaining maritime safety and security” in the Indo-Pacific region. This article analyzes the Australian Prime Minister’s visit to India and its outcomes relating to the maritime domain. The article argues that the uncertainties about China’s perception of a maritime order is bringing India and Australia closer to strengthen the existing maritime security architecture that in a mutually favourable manner.

It is pertinent to mention that India’s foreign policy engagement has become proactive under Prime Minister Modi, and India’s effort to strengthen relations with Australia is an example to substantiate that. In 2014, Indian Prime Minister Modi visited Australia. It was the first visit to Australia by an Indian PM in twenty eight years. Realizing the need to integrate Australia within India’s growth story, PM Modi clearly conveyed that Canberra “will not be at the periphery” anymore. The new PM of Australia Malcolm Turnbull, within a year and a half of his assuming office, visited New Delhi to mark the newfound continuity in bilateral relations.

Australia and India in recent years have cooperated in various aspects like cooperation at the regional multilateral institutions such as East Asia Summit (EAS), Indian Ocean Rim Association (IORA) as well asbilateral exercises between the two navies. The first bilateral maritime exercise AUSINDEX was held in the Bay of Bengal in 2015, and both sides agreed to conduct it again in the first half of 2018 near Western Australia. Also, for the first time, the two sides agreed to conduct a combined army exercise in 2018. Although the visit failed to reach a Comprehensive Economic Cooperation Agreement (CECA), the growing maritime security cooperation is evident. It underscores the growing trust between the two countries.  This may eventually lead to an economic cooperation as well.

A few major developments have act as a catalyst to India-Australia bonhomie. The Joint Statement laid a greater emphasis on a rule based maritime security regime. It was agreed that maintaining stability and security in the Indo-Pacific is fundamental to growth and prosperity of both the countries and region. The Joint Statement mentions the need to maintain a maritime legal order based on the 1982 United Nations Convention of the Law of Sea (UNCLOS) stressing on“freedom of navigation, unimpeded lawful commerce, as well as resolving maritime disputes by peaceful means in accordance with international law including UNCLOS”.

Although there was no explicit mention of South China Sea, it is not difficult to comprehend that the Joint Statement was propelled by the uncertainty about China’s intentions in the semi-enclosed sea. In July 2016, the Permanent Court of Arbitration announced itsruling on the Philippines’ case vs China relating to latter’s territorial claims in the South China Sea. China however, dismissed the tribunal’s verdict. China’s land reclamation and military activities in South China Sea islandscan be a challenge for sea-borne commerce. Over 55 percent of India’s tradepasses through the South China Sea. Expertsin Australia fear a US$5 trillion meltdown, if global trade flows are disrupted due to the disputes. Therefore, maintaining an unimpeded sea-borne trade flow is crucial for both Canberra and New Delhi.

The growing regional tensions due to the unresolved maritime territorial disputes between China and its maritime neighbours in the South China Sea can have serious implications towards the security of the international shipping lanes (ISL). Australia is an island nation and exclusively dependent on a stable maritime order in the region. Therefore, despite Canberra’s conscious effort to limit the differences with its largest trading partner, South China Sea issue will shape the future foreign policy choices of Australia.

Lately, India-China bilateral relations have remained tenuous over various issues. Beijing issued a series of warnings to New Delhi with regard to Dalai Lama’s visit to Arunachal Pradesh. Xi Jinping’s announcement of China Pakistan Economic Corridor (CPEC) and construction of projects through POK is another major irritant. The disregard for India’s sovereignty and attempts to isolate India in its neighbourhood has compelled New Delhi to further its outreach off the eastern sea board by forging new partnerships such as the one with Australia.

China is one major factor but non-traditional security concerns are equally relevant to the national interests of both the countries. For Australia, the asylum seekers or the ‘boat people’ is major security issue. Piracy at sea can become an acute challenge for India and Australia. East Asia Summit Maritime Security Conferences have been conducted in 2015 at Goa and 2016 in Sydney by India and Australia respectively to raise maritime domain awareness. Given the significance of marine resources for economic growth and social development in the coming decades, the Joint Statement had acknowledged the need for a sustainable development of marine resources and cooperation in development of blue economy.

The scope of India-Australia partnership has significant potential, provided the words of the Joint Statement are corroborated with fruitful actions. The two might enhance maritime security cooperation with Southeast Asian nations. For example, capacity building of the maritime forces of Vietnam and Philippines could effectively correct the existing military imbalances. India and Australia can initiate a trilateral dialogue with Indonesia. It is also necessary for India to balance its increasing maritime security cooperation along with equally strong economic cooperation with Australia. The political leaderships of both sides are coming out of past inhibitions that had prevented cooperation between two major maritime powers of Indian Ocean.

Australia and India might have different strategies to cope up with their challenges, but a perceived challenge from China in the South China Sea has been a major push factor to consolidate their converging interests. Maintaining an uninterrupted sea-borne trade flow will require India and Australia to synergize their actions in the region. ‘Indo-Pacific’ as a geopolitical terminology has gained momentum among strategic circles in Australia and India, the apex political leadership of both the countries, and has begun reinvigorating the concept.

*Eshita Rudrais a Research Fellow at the National Maritime Foundation (NMF),New Delhi. The views expressedhereare herown and do not reflect the official policy or position of the NMF. He can be reachedat ishicooljnu@gmail.com