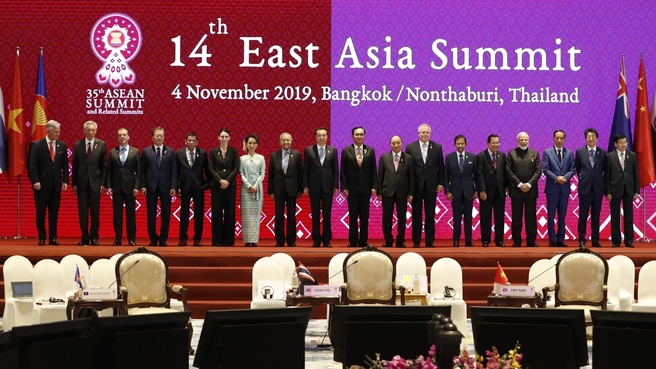 During the 14th East Asia Summit held in Bangkok on 4 November 2019, Leaders emphasized the importance of the ASEAN Outlook as a guide for ASEAN’s engagement in the Asia-Pacific and Indian Ocean regions to contribute to the maintenance of peace, stability, freedom and prosperity as well as the Prime Minister of India highlighted global challenges, and made special mention of the need for a rules-based international order in the Indo-Pacific region. While highlighting the criticality of finding common solutions by working together, Prime Minister proposed an “Indo-Pacific Oceans Initiative (IPOI)” for addressing challenges and ensuring a safe, secure and stable maritime domain. The central maritime focus-areas of this proposal include security; ecology; resources; capacity building and resource sharing; disaster risk reduction and management; science, technology and academic cooperation; and trade, connectivity and transportation. In the forthcoming Fourth EAS conference on Maritime Security Cooperation, it is intended to set out these issues in order to establish a base for future dialogue on this initiative and to create platforms for such cooperation.

Earlier, the Ministry of External Affairs (MEA) of the Government of India, in partnership with the Research and Information System for Developing Countries (RIS), and the National Maritime Foundation (NMF), had organised the inaugural, second and third EAS Conferences on “Maritime Security Cooperation”, on the 9th and 10th of November, 2015, in New Delhi; the 4th and 5th of November, 2017, in Goa; and, the 8th and 9th of June, 2018, in Bhubaneswar; respectively. EAS participating countries had nominated participants to each of these Conferences. Over 100 delegates, including Senior Officials, had enriched each of the Conferences by their attendance. Each of these Conferences had been structured over multiple sessions, aimed at facilitating an in-depth debate on various aspects relating to maritime security cooperation. Issues discussed included Maritime Domain Awareness, the Emerging Security Architecture within the Indo-Pacific Region, Maritime Connectivity, the Blue Economy and Maritime Conservation, the Cooperative Delivery of ‘Common Public Goods’ at Sea, Maritime Multilateralism, Maritime Safety, etc. These issues remain relevant in that they constitute a mix of opportunities and challenges for the countries of the Indo-Pacific, and necessitate continued attention of the national governments of EAS participating countries.

Building upon the success of these three earlier Conferences, the Ministry of External Affairs of the Government of India, once again acting in concert with its knowledge-partners, namely, the National Maritime Foundation (NMF) and the Research and Information System for Developing Countries (RIS), will organise the Fourth International Conference on “Maritime Security Cooperation” in Chennai on 6 and 7 February 2020 for EAS participating countries. The Conference
is expected to serve as a platform for open and free dialogue among all EAS partners, irrespective of the positions nations may have on any or all of the issues in the maritime domain. The event seeks to foster the spirit of inclusion, openness and freedom, for all viewpoints to be heard and considered. It is expected that the Conference will foster greater understanding for all EAS partners’ views on all subjects including the Indo-Pacific. The Conference will be conducted over four key sessions and one special session, so as to facilitate an in-depth debate on various issues of maritime security cooperation.